Selma: “There is Power in the Blood”

Camera lenses, like childhood memories, make spaces appear much larger than they are. Like the Dallas book repository, like the Lorraine Motel, Selma emerges, from the cold rain, small – only a few blocks in each direction. Our three modern buses took an opportunistic driving tour, making turns every two blocks or so, winding carefully through the narrow streets as veterans of the ’65 action provided commentary. The ones who’d been there spoke, as they would for the entire conference, like war veterans, expansively of the larger experience, modestly of their own part.

Our first impromptu stop was by the marker for Rev. James Reeb, the Unitarian Universalist minister whose fateful wrong turn out of a restaurant cost him his life. (The movie, “Selma,” called Rev. Reeb a priest, the smaller of many unexplainable inaccuracies) Rev. Reeb died days later of head wounds from the blows of White attackers. Such was the state of justice in Alabama that none of the local men were convicted by the all male, all White jury. But, in the small town of Selma, it was common knowledge who wielded the metal pipe – his auto dealership was pointed out on our August planning trip. It was business as usual in the the Jim Crow South. (I’ll get to Jimmy Lee Jackson’s death later).

I stepped carefully off the steep narrow steps of the bus into the rain to feel a space hallowed by blood. I didn’t know him, but I did. I met him in planning meetings, in hallways, and ballrooms throughout the conference, in those who would describe themselves in the movement as interchangeable parts – one soul with many faces. It could have been any one of them.  They answered Dr. King’s plea to the nation, they put themselves in harms way.

As we were to hear later that night, “There is power in the blood.”

My eyes were drawn to where people had gathered under a small funereal tent.  The soft unpracticed voice of a young women had drawn everyone into a close huddle, silently leaning in, straining to hear. The word “grandfather” rippled the palpable sadness. I could only sporadically understand what she was saying, but words weren’t necessary. Standing solemnly together in the cold felt like the very roots of human experience. I was drawn to Selma, as probably everyone was to some degree, to experience it in my guts. It was happening.

We moved on slowly, thoughtfully, back to the buses – reticent to let go of what we’d just experienced. In front of Brown Chapel A.M.E. Church we stopped for the Martin Luther King, Jr. memorial. It was explained that this was the SCLC church, while SNCC was typically down the street at the 1st Baptist. Word spread that we were being allowed into the sanctuary and it was confirmed by the sexton of the church striding past, articulating loudly to himself the full names of those who had paid our admission: “James Joseph Reeb, Viola Gregg Liuzzo” (the Unitarian Universalist housewife murdered by the Klan as she drove marchers back from Montgomery). As a member of the planning committee, I wish I could say that we had arranged this, but it was a tremendous stroke of luck.

To walk into Brown Chapel is to walk into history. Martin Luther King, Jr. defined moral courage from this very pulpit on the day after Bloody Sunday.  Under pressure from every possible direction to back down (including the President of the United States), under the constant and very real threat of assassination, King defiantly said that “a man dies when he refuses to stand up for justice.” He and the marchers the next day went on to defy, for the first time, an order of the very Federal Court that had been the movement’s staunchest ally from the beginning. Brown Chapel has been filled with indescribable tension and fear,  blessed by brilliance under fire, and sanctified by ineffable courage and hope. It is humbling to stand in that space.

The sanctuary, itself, is unusual in that the pews slope downward to the pulpit, more like a theatre. The minister is not on an elevated platform above the attendees.  Being there in the afternoon, it’s emptiness was a little like being on a jet, powered down on a runway. The organ, directly behind the pulpit, drew me and led me to imagine what hands had earned that honor. I was taking photos of the keys when I felt a tug on my sleeve. I turned to see a beckoning finger – we were going to get to sing in this incredible place.  Kim and Reggie Harris led us: “this little light of mine, I’m gonna let it shine,” “we shall not, we shall not be moved.” Everyone in the church stopped, came forward, and immediately joined in.

To sing in Brown Chapel with Reggie Harris was, for me, at once the most normal thing in the world, and an unforgettable apogee in a conversation that began more than three decades ago. Born three days apart, we share many many common life experiences. But I have never presumed that I could any more understand the experience of being a Black male in America than I could understand being pregnant. So we have always talked about Race. In fact the first line of “In The Name of Love,” (“when I get tired”) comes from a phone call I made to Reggie years before I wrote the song. It had become apparent to me that I could cut my hair, say the right things, play the game, and blend seamlessly back into mainstream America. I told him that I couldn’t imagine how tiring it must be to be responded to every second of your life on your most superficial characteristic.  Without hesitation, he responded, “you have no idea.”

We have sung together, cried together, laughed together (everyone should know Reggie’s laugh). I have helped him walk the halls of the hospital where he’d just received a new liver, I’ve told him things I’m not proud of, I’ve felt his wrath when I didn’t pass him the ball when he was open. For as much as I  comprehend the word, we are friends. He is my chosen brother. To sing with him in Brown Chapel was a transcendent moment, a tribute to openness, understanding, respect, and love. It is no accident that those same words were uttered manifoldly throughout the conference as to what took place in 1965 – and as to what must take place.

“When I get tired, it’s like I was dropped into the sea,
you could swim your whole life and be nowhere you want to be.
Everyone gets tired, and the water is so wide,
Then somebody comes and shows you, shows you the other side.” 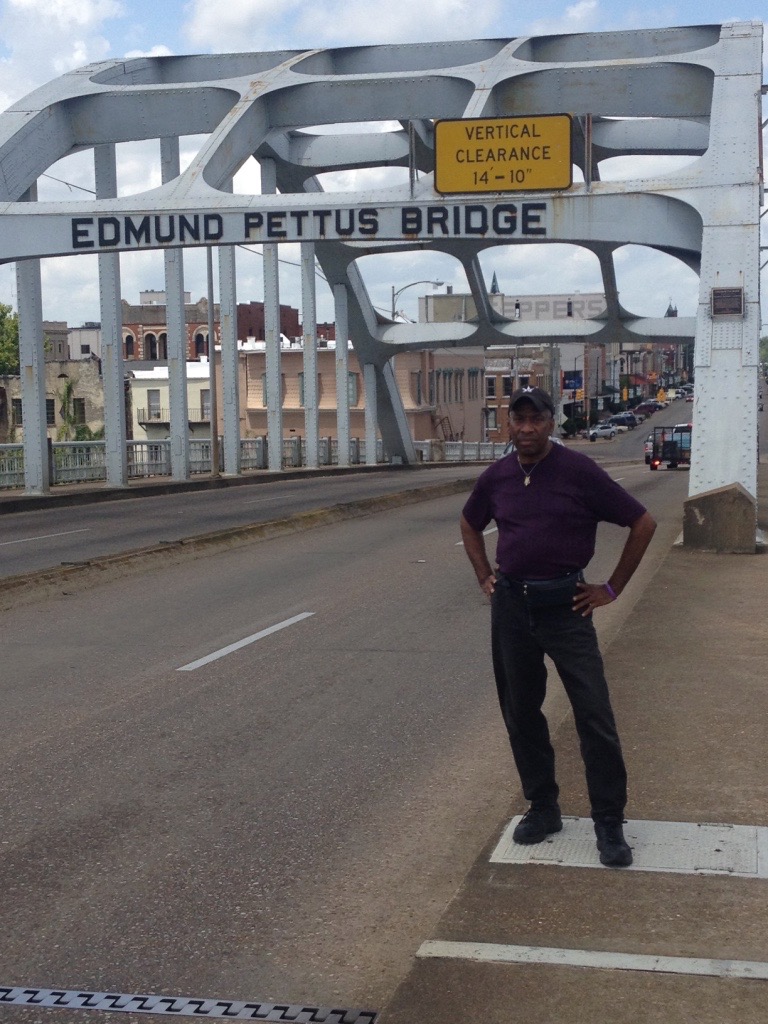