The Land is Blameless

Deeper Than The Skin III: At the Whitney Plantation and Slavery Museum

Friday, the day of so much anticipation, has arrived. The cornerstone of our 1,400 mile journey lay an hour away. We drove across miles of low causeway over murky Lake Pontchartrain, through the lowlands west of New Orleans to the broad expanse of sugarcane country that holds the Whitney Plantation. The Mississippi Delta, this lowslung invitation, is unlike anywhere I’ve ever been.

For someone raised on a high hill above a river, it is unsettling to descend onto ground that is lower than the massive weight of water that is just on the other side of a levee. It’s a little like passing the cage of a huge, languid tiger and unconsciously looking back over your shoulder for the rest of the day. But, this is why we have come, Reggie and I, to go to the unconfortable below and tie it to our histories on the James River. Reggie’s forebears almost certainly were brought ashore from that same James River – one mile from where I grew up. We were now driving to the far point, the last, most pernicious extrapolation of what began as survival on the James, and morphed and formalized into wildly profitable factories whose machinery was human beings. Even to this day, it has survived as the shadowy subtext to a great rift, an abyss of denial.

For all of my foreboding and gravitas on the eve of this momentous day, I found the grounds of the Whintey Plantation completely devoid of ghosts. It was almost shocking. The atavistic red stalks of the sugarcane spread everywhere, looking as if they had grown exactly there from the beginning of time. The long stretches of green grass were innocuous, obscuring nothing. There was a pleasant breeze beneath the early fall sun. The Big House, as it was called, was not ostentatious. It was more of an outpost from the lavish home in New Orleans. The widow who brought the plantation to its money making pinacle was a self-exiled outsider as well. As with the rolling farmlands of the battlefield at Gettysburg, at the Whitney Plantation, you have to bring the backstory with you. The land was blameless.

It was left to the sharp edge of our guide, Adina, to lead us through the buildings and monuments, to portray the inhuman landscape of a working plantation. During its richest period, 250 enslaved individuals worked its seasonal production schedule. Two iron cages were the only physical affront, but even they – as tortuously hot as they must have been in the Louisiana summer –  were where “bucks” were fattened up and preened for sale. Perhaps it was me, my expectations of a museum in its infancy, but being told and not shown, was disappointing. Unlike the National Civil Rights Museum at the Lorraine Motel in Memphis, I could not feel the people.

As compelling as our guide endeavored to be, I was almost completely lost to her the moment we entered the transplanted Antioch Baptist Church. The church was built after the Civil War and was originally called the Anti-Yoke Society. It was formed to allow former slaves to have proper burials. Coming into the sanctuary, you realize that the church is populated with “The Children of the Whitney,” a collection of forty life sized statues representing the children present on the plantation at the time of emancipation. They are possessing in the way that only great Art can be. The artist, Woodrow Nash, stylized them most effectively – eyes left vacant, attention straight ahead – but their body postures are so convincingly human that the corners of your eyes accept them as living, breathing individuals. I knew instantly the reason the fields felt so empty, the ghosts of the past were all here in the church.

These innocent souls, small and attentive, awaited freedom. Reggie and I went back at the end of the tour to sit with them, separated by four generations, knowing what they could not know: that lynching would move indoors into courtrooms, that the money making machine would find new names for old descrimination, that their children and their children’s children would struggle against oppression in every form, institutionalized and most sadly, internalized.

But, we listened in the silence and heard what they had to teach us. It was a haunting lesson about love and hope and perseverance beyond imagination. A descendent of slaves, and, most probably, a son of indentured servants have come here to hear you and bear witness – and to tell you that one of your children’s children’s children will one day stand on the steps of the Capital, before a newly elected president, and refute hundreds of years of lies and oppression with what you carried inside you and passed on.

…History, despite its wrenching pain,
Cannot be unlived, and if faced
With courage, need not be lived again…

From “On The Pulse of Morning” by Maya Angelou 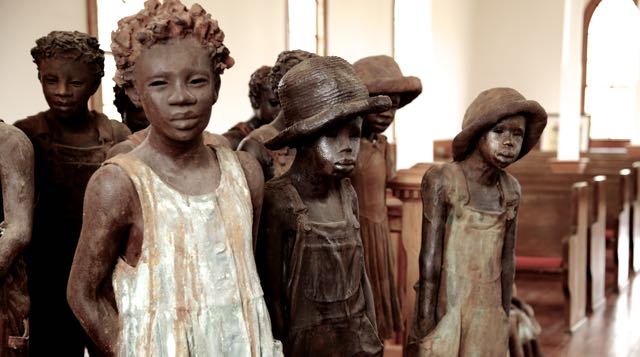